Mansor must have chosen “The Bastion” as the title of his piece as he thought of the members of  the Pasukan Pancaragam (I am not sure what it was called in English: Brass Band, Marching Band or Military Band?) as hard core individuals who remained steadfast in the Band until their last year in school. I was one of them. Over the years, many dropped out from the Band. Maybe they could not withstand the frequency of the practice sessions. Other societies had their sessions fortnightly but we had band practice weekly or even twice weekly as certain events grew near. Perhaps some withdrew after finally accepting that they had no musical talent whatsoever.

The Band must have provided the only opportunity for students in STAR to receive musical training albeit in the most rudimentary manner. Being pragmatic, our advisors did not bother with teaching the members how to read proper musical scores in the form of “taugeh” notes as we called them. For example, for Inilah Barisan Kita, the notes would look like this:

Musical instruction was imparted in “hand me down” fashion. The seniors, to the best of their ability, would teach the juniors to play modern musical instruments such as the trumpet, cornet, tuba, trombone, clarinet and saxophone. If producing tuneful sounds was not achievable, acting ability in playing the instruments would be quite sufficient.

The most desired instrument would be the side drums. The drummers would be in the front line, giving them the highest profile. Looking cool was part of the job description and usually a pair of Raybans helped to achieve the desired effect. The drummers would invariably be students in the higher forms due to the prestige such a position would accord.

As I already had some formal musical training, I decided to forgo the glamour and stuck to the saxophone, which together with the trumpets and cornets (led by Yan from ’87 who had been playing from primary school) served as the musical backbone of the Band. Maybe also because the informal “Orang Kuat Sax” title given to the lead saxophonist had a nice ring to it.

I don’t want to ramble on further and steal the limelight from Mansor and his most entertaining and nostalgia inducing piece. I end here by saying that “The Bastion” is a must read for former Band Boys to relive their glory days.

Mansor Kassim’s profile as a contributor was inadvertently left out in IWE. Better late than never, here it is:

Mansor was our rugby captain. Being good with his hands, he was also in the volleyball team and a drummer in the marching band. His rugby playing days ended after a spinal injury sustained playing for the KPP-ITM team but he has made a full recovery since. Having made a killing as a fund manager for ASNITA, he is now self employed and applies his entrepreneurial acumen towards his own business in the construction industry.

When Ainul Azam mooted this project in 2013, he suggested “I Wuz ‘Ere” as a working title for the book. I am quite sure now his choice of words was deliberate because even then, everyone in the pro-tem committee accepted the proposal without debate. As the book materialised, the concept and content of the book naturally evolved around this ubiquitous graffiti scribbling.  Now the official title of our publication, we cannot imagine any other title fit for the task.

Ainul’s interpretation of what I Wuz ‘Ere means is found in the prologue. To me, it’s representative of growing up in the 80s. This was a period when there was no digital forum or social media for teens to declare their existence and express their angst. The toilet walls were just as interesting to read as Facebook timelines. [Insert nickname] wuz ‘ere appeared to be the most popular slogan.

As I recall, there are at least 2 references to toilet graffiti in the book. In Lamjah Juka’s article, he still ponders the significance of a piece of graffiti which says, “Mum, why are you always against dad?” (which I suspect must be have been authored by a Set S student). Don, on the other hand lists down the graffiti signatures (Fu Sheng, Lan Mokhtar and Jai Toert) found everywhere in school, further immortalising the personalities long after the cleaners have wiped their sobriquets off the walls. I was pleasantly surprised recently to find out that this Fu Sheng fellow is somebody known to me and am on friendly terms with. His mark (made with soot stain) was starkly visible on the Blue House balcony for the first 6 months of 1982 although he left the previous year.

On a related note, it is opportune to explain how the I Wuz ‘Ere graphic adorned the book cover. As the publication date grew near, the editors organised an I Wuz ‘Ere graffiti writing competition where the entrants drew their version of the graffiti (digitally or on hard paper) and sent it to us. The best design was to have the honour of being featured as part of the book cover.

Our Art Director, Zahir selected Jie’s design. The rest of the designs which didn’t make the book cover were still featured in other parts of the book. Jie explained that this graffiti design was the exact same one he used in school. He couldn’t remember all the places which had the honour of being tagged by him but he could distinctly recall that the ceiling fan in the White House common room was decorated with his mark. That’s unfair advantage if you ask me because Jie had more than 30 years’ head start to perfect his design.

Ainul Azam in the prologue jokingly said that as a copyright and trade mark practitioner, he would love to file a claim over the words I Wuz ‘Ere. He recently told me he did. So if anybody is thinking of naming their batch memoir I Wuz ‘Ere Too or such like, you have been given notice.

Unexpectedly, this was the piece that struck the most resonance with my batchmates. It’s a more manly way of saying that it left them blubbering like idiots.

When we were in STAR, most of the time we actually forgot that Yeoh was Chinese. For a start, he could speak with a real Perak accent which is more authentic that I could muster when I go back to my kampung near Batu Gajah. A funny incident related in his article is when a warden pulled his hair demanding, “Mana songkok awak?” Yeoh just replied factually, “Saya Cina, Cikgu.” I am sure until today he keeps his mouth shut or sticks to English while having lunch during Ramadhan so as not to attract awkward stares.

Yeoh was not the only Chinese in STAR ’86. There were also 4 other brothers. They all spoke flawless Malay from day one. I am not sure how they spoke before they came to STAR but as an amateur linguist I am convinced that everyone has an ability to adapt when one tries hard enough. Something for our proponents of national unity to think about.

I hear now the Chinese Starian is extinct in STAR (as are Indian Starians, I guess). How sad. For many, that could be the first real bond of friendship with a non-Malay, coming from a heavily polarised education system.

Why were my friends blubbering like idiots?  As one of our ’86 brothers declared in our Whatsapp group, when we discussed the article, “Yeoh…for me u were never a Cina or whatever race u want to call yourself. U are my brother first. I am sure all of us feel the same.” Yeoh’s article drove home the point that our brotherhood was so strong, it transcends any racial barriers.

I can’t vouch for the other batches but in STAR ’86, there were really no Chinese Starians.

Don’t even try to enlarge the photo. You have to buy the book to read the article.

After the publication of IWE (which will be my shorthand for I Wuz ‘Ere: Memoirs of STAR ’86 from here on), I showed this article to a young Old Boy who works for me. He asked me, “Who is this?”

What? It’s like a Liverpool supporter asking the same question upon being told about Kenny Dalglish.

We are glad we did this article so Pak Lau’s more colourful life story is preserved. It wasn’t easy to write the story because while he had some cool stories to share we also had to be reverent to this man who acted in loco parentis to us when we were in STAR.

In fact, the references to Pak Lau in the book are plentiful. Everybody had a special memory of him, and I use the word “special” here liberally. If not for Pak Lau, maybe there would be a serious deficiency in the stories that could be told.

As a sneak preview, I would only like to disclose that for the first time ever, the “Hantu Ragbi” folklore is finally explained from Pak Lau’s perspective. Interestingly enough, that young man has heard of the Hantu Ragbi story but not of Pak Lau.

Happy reading and reminiscing. May the article bring back the nightmare of not being able to give the correct answer in your Sains Paduan class.

It’s hard to believe that my last blog post has been more than 8 years ago. Since then I have lost access to my old blog at http://tigerlaneboy.blogspot.my/ as I can’t for the life of me remember what my username was (it’s not tigerlaneboy, apparently) and it looks like my postings will forever be frozen in immortality (although the spammers appear to be thriving in the comments).  So goodbye Blogspot and hello WordPress. 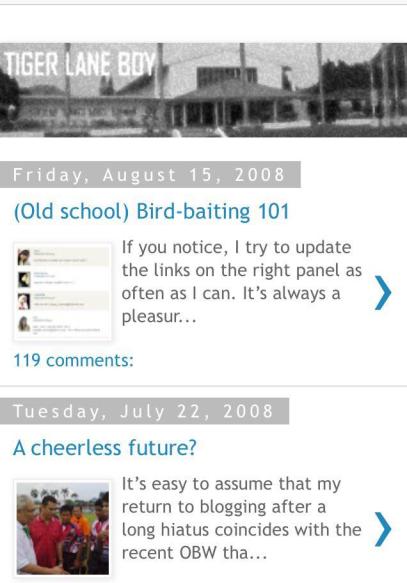 Since then, blogging has become quite passé as netizens (is that even still a word now?) are more drawn to social media and Facebook appears to dominate the webosphere (seriously, I have to take a crash course on new internet buzzwords).

This return, or more appropriately, resurrection, coincides with the launch of the coffee table book I Wuz ‘Ere: Memoirs of STAR ’86 published by my batch. One could say that even after the book was published my fingers are still itching to write. That’s true, but I would like to perform a more useful function. I would like to raise awareness of the content and issues presented in the book through this blog.

Some Starians outside Batch ’86 appear to think that the book is only relevant to our batch. That may be true of some articles as only we could relate to them.

However, the book is actually very relevant to the rest of the Starians. As Sukardi Rahmani of Batch ’84 comments, “While I definitely recommend this book to all readers who desire a guide to an exciting dormitory life, I strongly recommend it to all Starians, mainly because it resonates better with them. Must see, must own and must read if you want to rekindle your early student days.” (his visitor comment is found in https://www.facebook.com/iwuzerestar86/)

I am sure many can relate to the stories of how the poor kampung boys felt like they had won the lottery when they received an offer to study in STAR. Some may even relate to the stories of the urban boys who had to bear with the downgrading of their lifestyle when they swapped their life of relative luxury with crowded dorms and communal bathrooms. There are stories of friendships and brotherhoods, of hopes and ambitions and of gratitude to teachers who have shaped our lives.

So read the book so we can have ongoing discussions, debates and discourses on the articles which may go beyond the specific content of those writings.

Well, I hope I could keep up the momentum and churn out regular postings. And before I forget, Happy New Year. May 2017 be an exceptional year filled with abundant blessings.